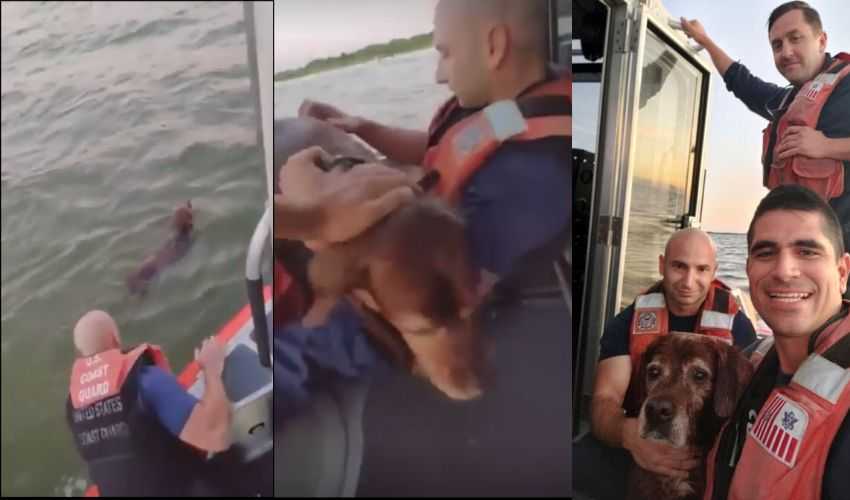 A dog lost in the sea got rescued by U.S Coast Guards
Manish Paul December 7, 2019 0

A U.S. Coast Guard workers of Fort Myers Beach in Florida were training near the offshore during their night patrol when they got a call about a pup lost in the ocean.

The three Coast guards jumped onto the boat right after the call without wasting any time.

When they reached the spot they saw the dog swimming all alone out in the ocean. One of the Coast guards started making the video and another two coast guards got into the action. One of the guards hung from the boat to reach the dog in water but the dog swam a little further away from him. The guard whistles and make sounds to call the dog near the boat.

What could’ve been a ruff day for this pooch turned out to be quite the tail!

A crew from Station Ft. Myers Beach was out training when they received a call of a pup in distress. They pulled him out of the water and returned him to shore where he was reunited with his family. pic.twitter.com/cmSwGUFt5L


As they reached closer to him, the guard again tried a little harder this time and finally get him out of the ocean – safe on the boat.

The dog shakes off the water once his feet touch the boat surface as seen in the footage.

One of the coast guards asked him, ‘How are you doing buddy? You are the best person I’ve ever rescued.’

The coast guards posted the video on facebook with caption, ‘What a Day!… Amazing work Station Fort Myers Beach!’

They added the photo with the dog sharing the smiling faces in the frame.

Later, the dog was reunited with the family once they landed on the shore.